Now many university faculty members have integrated technology to enhance teaching and learning, incorporating active learning methodologies in the classroom. According to a 2015 report released by IDC Government Insights, technology investment in the United States is at all-time highs with higher education institutions spending $6.6 billion, and California leading the way with approximately $2.3 billion in 2015.

Riverview started working with the University in 1989 providing audio-visual services for its commencement ceremonies. Over the years as technology has continued to evolve at an almost frenetic pace and institutions of higher learning continue to innovate in how they educate the students, Riverview has become a steady, trusted and strategic campus-wide systems integration resource. The company works closely with the Academic Technology Department providing state-of-the-art AV technology that has touched nearly every area of the campus — from the historic Mission Santa Clara de Asis, to outfitting numerous classrooms, conference and meeting rooms, large facilities such as its prestigious Harrington Learning Commons, Sobrato Technology Center and Orradre Library, performance spaces, sports venues and the business school.

While Riverview is well known for its award-winning live event staging services, a core part of their business is its Systems Integration Department, providing extensive support for businesses and institutions just like SCU. Over the years, Riverview professionals have designed and installed hundreds of complex audio-visual systems for universities, theme parks, Fortune 500 tech firms, startups, churches, museums and specialty venues. Accounting for their long-term success is Riverview’s proven methodology, refined over the course of countless installation and systems integration projects, emphasizing client communication and a workflow that ensures projects are completed on schedule and budget. Key services include:

Cutler also notes that working with Riverview has been key to converting the entire campus media systems from analog to digital while maintaining upgrade cycles that keep their spaces compatible with current technologies – all of which has been critical to their instructional spaces and its support of an ever-growing range of teaching and learning activities.

“We consider Riverview more of a partner than a vendor as they work with us to meet the needs of our campus community,” Nancy Cutler says. “They have supported us on both the technical and design side and provided us excellent customer service.” 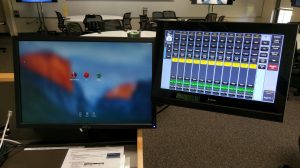 As for the most challenging projects where Riverview’s experience and talent shone particularly bright and exceeded the university’s vision, Cutler points to the Harrington Learning Commons in 2008; the Paul Locatelli Student Activity Center in 2011; Graham Commons in 2012; Guadalupe Hall in 2015; and Alameda Hall in 2016.

“We value our three decades of collaboration with the Santa Clara University technology administrative team,” Evan Williams, Riverview’s CEO and Co-Founder, says. “As the adoption of handheld devices continues to proliferate and digital technology now permeates everyday life, Riverview stands ready as a resource to help them navigate the technology needs of the college classroom and campus infrastructure of the future.”

“As technology has advanced throughout the years and the University continues its expansion plans, our systems integration team continues to recommend, access, install and manage equipment installation such as cameras, speakers, flat panel displays, audio control systems and more,” Vrzal says. “Our goal is always standardizing functionality throughout the campus – in classrooms and on-campus events to help SCU meet its goal to provide students a cutting-edge education.”

Soto adds, “Over the years, as Riverview has taken on greater responsibility for campus technical infrastructure, we’ve stayed in close contact with the client via frequent onsite visits to the campus to ensure the technology is functioning properly and troubleshooting potential issues before they become problems.”

Among the many high profile systems integration projects Riverview has provided to SCU include the following:

The cornerstone of Riverview’s systems integration work at SCU is most clearly demonstrated in the Learning Commons.

The 2008 installation included 57” NEC flat-panel LCD screens, Panasonic projectors and multiple video and computer sources allowing students to share files and work on projects. In the St. Clare Room, the signature reading room and event space, Riverview installed the then cutting-edge Panasonic 1080p large venue projector in an application where projector and screen are completely hidden until a touchscreen lowers them (as if in a James Bond film) — complete with inputs for connecting Blu-ray players, computers and even linking other classrooms. The AMX touchscreen allowed presenters to control everything from lighting to the wall-mounted cameras, while web streaming capabilities (based on MPEG-4 encoding) let students watch classroom activity in real-time or stream it at their convenience.

In 2013, following an eight-month SCU data gathering process that included student focus-groups and a student survey in which over 2,300 responses were received, the university decided to consolidate and relocate service points, and Riverview was brought in to handle the massive tech upgrade the project represented.

“We replaced all of the control systems, the monitors in many of the collaborative spaces and made some of the taping rooms (rooms where students can watch required viewing material or easily record themselves and copy onto a USB drive for later viewing) more user-friendly,” Soto says.

Then again, in 2016, Riverview upgraded the existing projection in the St. Clare Room to a Panasonic PT-RZ970 10,000 lumen HD laser projector. They also outfitted the room with 60 state-of-the-art Televic microphone systems so everyone can be heard easily eliminating the potential for feedback while keeping the overall sound low in the room for confidential gatherings.

In its effort to ensure its athletic programs match its academic excellence, Riverview has also been tasked to help SCU renovate locker rooms with state-of-the-art technology. After SCU’s soccer team was awarded a grant to build a new facility for the men’s and women’s soccer teams, which included not only the locker rooms but also the coaches office and lounge areas, Riverview responded by installing a “halo” (circular row) of 5 – 46” NEC LED Monitors where players can watch programs of their choice as they prepare for practice and games. There is also a main 80” monitor, complete with an Extron’s Annotation Technology coupled with Apple TV and iPad telestrator apps for writing notes or illustrating the game strategy.

The facility is Wi-Fi/Bluetooth enabled allowing athletes to capture a great moment on their mobile device that can be screened on any of the monitors in the locker room.

Riverview was also involved in the recent tech upgrade of the SCU men’s and women’s basketball teams’ locker room facilities, which also feature Live Name Plates (24” monitors) above each locker so player’s names and highlight reels can be looped.

“With the control systems’ standardization in place, now students and teachers in many classrooms can access technology in the same way,” Vrzal says. “Teachers can use the control panel to access flat screen monitors, video conferencing, audio reinforcement, promote collaborative learning and share information on their computers as desired.”

Soto added that Riverview has adopted plug and play technology that lets students plug in their device and display content hassle-free. “Every conference room or collaborative space should be easy for anyone to use and cater to the needs of every user; whether it’s plugging in a laptop or sharing information on a tablet wirelessly. We can customize collaborative spaces to specific requirements.”

Riverview’s technical footprint can also be seen around the SCU campus in a myriad of ways. Namely:

The historic Mission Santa Clara is a consecrated Roman Catholic Church situated on the SCU campus. First established in 1777, the Franciscan Order handed the Mission over to the Jesuits in 1851 who then started Santa Clara College, the first institution of higher education in California. Systems integration work on the Mission Santa Clara de Asis began in 1995 when Riverview implemented an analog audio routing system that was far ahead of its time. Today that spirit of innovation is apparent in their more recent work that features several separate audio zones that digitally route the speakers to different areas of the church depending on the event, including the front of the church, the right or left sides and in-the-round.

From the beginning of their work together, Riverview has continually provided live event design services to the university in support of its undergraduate, graduate, and school of law commencement ceremonies. Held annually outdoors, Riverview provides the design, staging and onsite technical expertise for this important rite of passage, including the use of large screen LED walls, lighting, audio and the ability to easily live stream via Facebook Live and on the university’s website. As with many of today’s campuses around the country, SCU attracts noteworthy speakers including

this year’s commencement speakers, Juan Felipe Herrera, 21st Poet Laureate of the United States and Leon Panetta, former Secretary of Defense. The caliber of speakers the school attracts each year reinforces the need for audiovisual reliability.

For psychology students, Riverview outfitted one observation room and three counseling spaces with advanced video and audio recording technology and USB interfaces so students can monitor counseling sessions and even walk away with a recording of sessions for later use.

The St. Joseph’s Hall/President’s Board Room:

Today, St. Josephs Hall, built in 1911, is where the college president and administrative staff hold regular meetings and conference calls. Riverview most recently installed a 16-channel Shure Axient wireless microphone system to make sure all participants can be heard and content easily recorded and archived.