Back to Blog
Team Blue was once again back at the annual American Academy of Orthopaedic Surgeons (AAOS Members) meeting in San Diego, providing creative/tech support for our long-time client Zimmer Biomet. The show — the most important industry event attended by orthopedic surgeons and allied health professionals — was held March 14 through March 18, and marks our 19th year at the AAOS as a direct vendor to Zimmer (as of 2016, Zimmer Biomet), working with the company’s Convention Services division. The overall Zimmer Biomet exhibitor show footprint booth this year was over 29,400 sq. feet, featuring a 2nd floor with an additional 5,500 square feet, housing a dozen private conference rooms. The load-in alone took nearly 10 days with a crew of 20 RSG team members and an additional 60 locals to bring it all together. 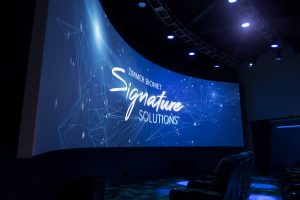 “Our team began working on the project in April 2016, just after we finished the 2016 AAOS show with Zimmer Biomet, helping to choose appropriate booth space within the convention center, in terms of rigging capacities and the profile that the space choice gives Zimmer Biomet within the overall exhibitor show footprint,” Evan Williams Riverview’s CEO says. “We then worked very closely with Catalyst Exhibits to take the evolving design, theme, and focus, and suggest solutions for how best to achieve the marketing vision. We are allowed a great deal of leeway as we come up with creative technical solutions, along with content design partner, Varipix.” Williams explained that due to Zimmer Biomet’s new ‘Signature Solutions’ initiative, which became the thematic focus for 2017, an immersive theater experience was suggested by the Event Marketing Group at Zimmer Biomet. Working with other key creative partners Stage Rigging, Inc., Catalyst Exhibits, Inc., TRU Service Group, and Varipix, Riverview helped facilitate an immersive theater, featuring an ultra high-res video presentation on a 40’ blended wide cinema screen set in a private theater within the booth space with 4K resolution. “It ended up being the only blended widescreen, that I know of, ever presented on a trade show floor at a double-wide 4K resolution,” Williams noted. Another focal point this year was a 10’ x 55’ wide LED “Billboard” centered in the booth space allowing for overall branding, schedules of Zimmer Biomet events outside the booth and testimonials to significant surgical luminaries who had recently passed. 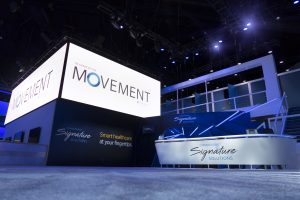 Equally impressive was the booth’s interactive and virtual components. From an interactive standpoint, Riverview designed and implemented a custom digital audio matrix system that gave tour guides and vignette presenters control over where their microphones were fed, in specific areas, for multiple small-group tours running simultaneously. The virtual booth experience had much to do with new mobile apps, for both iOS and Android platforms that were shown to attendees via tablets, as well as VR goggles and headphones. The Zimmer Biomet apps provided information about the future of interactive physical therapies that patients can interact with at home, as well as seamless transmittal of results to health care providers, etc. Riverview was tasked with the technical set-up of the various demonstration areas, including large touch screens that mirrored the VR experience. “The Zimmer Biomet exhibitor presence at AAOS has been massive for 19 years and the evolution of technology and automation continue to provide exciting technical and creative challenges,” adds Williams. “Through our collaborative effort with Zimmer Biomet and committed partners, our approach to the booth allowed us to create new and more sophisticated lighting, audio and video exhibit pieces to successfully deliver a unified design and inspired attendee experience.” For a look at the massive technology firepower required for a show of this magnitude, check out the gear list below! Riverview Systems Group: Zimmer Biomet Exhibit Booth Tech Facts: